Are you Worried About Wasps?

It’s that time of year again, and you have probably already had numerous wasps buzzing around your yard. You may have also wondered which kind of wasp you saw at your NJ or PA home. The most common wasps in New Jersey and Pennsylvania are paper wasps, mud wasps, yellow jackets, and hornets.

Paper wasps are about 3’4” long and are a commonly burnt orange-brown color. They can also have black and yellow stripes making them easy to mistake for yellow jackets.

They are one of the first insects to become active in the early spring and will remain active throughout the entire summer. Their nests are often referred to as umbrella-shaped since they hang upside-down attached to surfaces by a thin pedestal. These nests aremade up of a grey paper that is about 1-2” thick with open cells facing downward. You can typically find these nests suspended from horizontal surfaces (beneath eaves of the home, window ledges, or porch roofs).

Paper wasps are not very aggressive but will quickly become aggressive if their nest is threatened. If you find a paper wasp nest on your property, try to avoid using over-the-counter treatments as this can agitate them and potentially cause them to sting you multiple times.

Mud Wasps
Mud wasps are about ½ - 1 inch long, thin, and have a thread-like waist. They tend to be black with yellow striped legs, or a blackish blue color with long legs that hang down while they fly. These wasps are solitary and much less aggressive making them unlikely to sting unless provoked.

Their nests are made up of tan mud tubes that have a rippled appearance on the outside and an open end at the bottom of the tubes. Another nest type looks like a ball of mud. You will typically find these tubes cemented to the sides of buildings in protected areas such as a porch or garage.

If you spot a mud wasp nest on your property, you should not be worried as they don’t pose a threat and are beneficial in removing many species of spiders. However, the nest can be easily removed if desired. 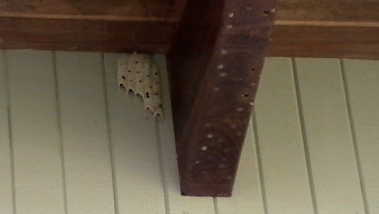 Yellow Jackets
Yellow Jackets are about ½ inch long with black and yellow stripes around their abdomen and short, narrow “waist”. They are social wasps that live in large colonies ranging in number from 1,500 to 15,000. The females are very protective of their nests making them rather aggressive stingers.

Yellow Jacket nests are made of a paper-like material containing multiple layers of paper cells that look similar to the honeybee’s comb. The nests are placed in protective cavities such as rodent burrows, and can sometimes be found in the walls and ceilings of buildings. Because this type of wasp lives in such large colonies and will sting multiple times, it is best to leave the nest alone and call a professional to take care of it for you.

Hornets
Hornets are closely related to yellow jackets and tend to look fairly similar. The two most common hornets in the Northeastern U.S. are the bald-faced hornet (black with pale markings) and the European Tiger hornet which is very large, about 1½ inches and are more of a brownish red color with a dull yellow abdomen. They are social wasps as well
and will sting if you get too close to their nest or pose a threat to them.

Hornet nests are also made up of self-made gray paper material and are known for their cone shape. They will often be found in trees, high in the eaves of buildings, in shrubs, or under decks. These nests are also filled with thousands of insects that will sting aggressively if disturbed making it best to leave to the professionals.

To remove an active yellow jacket, wasp, or hornet nest, click here to conveniently order service online. You don't need to worry about taking off from work because our technicians do not need to enter your home. Order your servcie online today and the nest will be gone tomorrow when you get home.

We also offer a Wasp prevention program that prevents paper wasps from building their nests on homes, decks, swing sets, storage sheds, etc. By preventing nest building, the presence of Wasps will be greatly reduced. One treatment will prevent nest development for up to six months.  To learn more about our Wasp Prevention Service click here.