Do you find stink bugs in your home every fall? Schedule stink bug prevention online today!

If you have recurring stink bug infestations in your home every year, please follow the steps below for online checkout.

Our Stink Bug Prevention Plan puts a stop to stink bugs before they come into your home. By performing the service in early fall, you'll beat stink bugs to the punch.

This program is designed for homeowners that have a history of stink bug infestations. If you find the occasional one or two stink bugs in your home, you may not have an infestation.

The Stink Bug Prevention Plan can only be scheduled during the following dates.

August 15th-September 30th: Service that is performed during this time period will provide you with the maximum amount of success. 90-100% of stink bugs can be prevented.

October 1st-31st: Stink bug prevention can be performed in October. However, the effectiveness of the service is lower as the season progresses.

After October 31st: The Stink Bug Prevention Plan cannot be performed during this time. At this time of year, stink bugs have already entered structures such as residential homes to hide during the winter. Because stink bugs hide in hard-to-reach spots like wall voids, reactive treatments are not going to be effective.

Stink Bug Prevention Plan Service Details
Our skilled service technicians will treat the exterior of your home to prevent stink bugs before they come indoors. Common entry points such as windows, cracks and crevices around the exterior of your home, windows, door frames, fascia boards, rooflines, and attics will be treated to repel stink bugs. One treatment stops 90-100% of stink bugs from getting into your house during the fall. 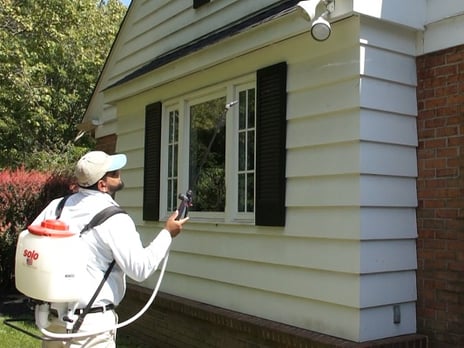 ✔Since 1955, thousands of homeowners within NJ and PA have trusted Cooper Pest Solutions to solve their pest problems.

✔Our knowledge, training, and reputation are second to none.

✔Fast service! We can begin service the next day, same day service may also be available.

✔Our Stink Bug Prevention Plan is highly targeted and successful for homeowners that suffer from relentless stink bugs infestations year after year.

"We had to endure stink bugs for many years until Cooper worked their magic. Now they're gone and my family can stop worrying about gross stink bugs flying in my house!"

*Have more questions? Prefer an inspection? No problem! Give us a call at 800-949-2667 to speak with a stink bug specialist.