Why Do I Have Boxelder Bugs In My House? 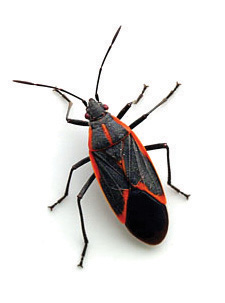 Adult boxelder bugs are about 1/2 inch long with six legs and are black with red and orange markings on their abdomen. Their wings lay flat across the back and overlap. Nymphs are bright red with a nearly identical shape to the adults, but without wings. They live in boxelder trees during the spring and summer, feeding off of the leaves, flowers, and seeds. Boxelder trees are incredibly common in nature because of their tendency to grow rapidly and without human intervention. Much like cluster flies, ladybugs, and stink bugs, boxelder bugs hibernate during the cold weather months to survive. This behavior is called “overwintering” and can become an issue for humans when infestations occur indoors. Common overwintering locations include wall voids and attics of human made structures such as office buildings and residential homes. 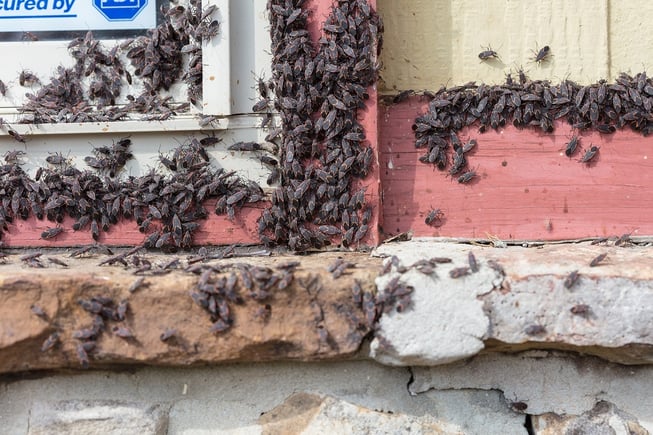 Pictured Above: Boxelder bugs swarm a window ledge, looking for access into a home

The good news is that despite their visible invasions, boxelder bugs don’t typically bite and do not poison humans and pets. They will not cause extreme damage to ornamental plants or fruits, nor do they cause structural damage to homes or other mad made structures. Once indoors, boxelder bugs do not reproduce, but instead, try to survive the cold until spring comes. However, boxelder bugs can invade in very large numbers and deface and stain both the interior and exterior of your property with their red excrement, resulting in an unpleasant scent. Trying to get rid of them on your own without proper guidance can worsen the infestation. Making the mistake of crushing boxelder bugs can increase staining and draw in other insects.

What attracts boxelder bugs to my home?

Boxelder trees, also called “ash-leaved maples,” are technically maple trees. They aren’t commercially sold and are treated more like a weed due to their ability to rapidly grow on their own in nature and tendency to attract boxelder bugs. Once mature, boxelder trees can grow up to 60 ft tall. There are both female and male boxelder trees which are easily differentiated by their flowering patterns. Females attract boxelder bugs more so than males due to the fruit they bear that looks like small drooping pods, turning green when pollinated. 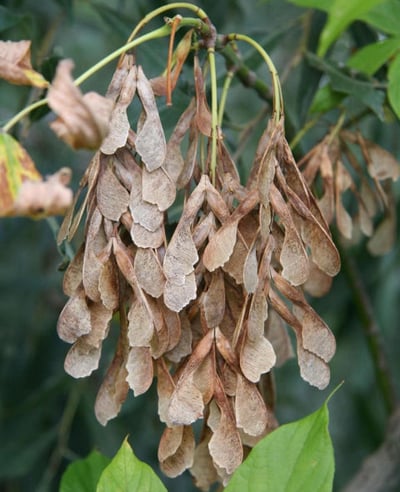 These seed pods are what you’ve probably seen dropping to the ground in your neighborhood in the fall like propellers that many call “helicopters.” Boxelder bugs primarily feed on these seeds, which is why female boxelder trees are significantly worse to have on your property. Removing boxelder trees from your property will greatly reduce the likelihood of boxelder bug activity. The main problem with total boxelder bug prevention is that even if you remove what’s growing in your yard because these trees grow so rapidly on their own, a boxelder tree on your neighbor’s property could be the reason why boxelder bugs are invading your home. By cleaning up these seed pods as you see them, you will be removing a boxelder bug food source. Boxelder bugs are also known to feed on the sap of maple trees, ash trees, and the young fruit of grapes, apples, and plums.

How long do boxelder bugs live?

Boxelder bugs are born in the spring, emerging from eggs within the crevices of boxelder tree bark. Throughout the summer, they live outdoors and mate, creating a second generation of eggs within a single season. Come late summer/early fall; the boxelder bugs are fully matured and begin their search for shelter for the duration of the winter. The University of California Agriculture and Natural Resources explains the behavior of boxelder bugs in early fall. “In fall, the adults seek overwintering places in dry, sheltered hollow tree trunks; under rocks, boards and other debris; in cracks and crevices in walls; in door and window casings; around building foundations; and inside houses. They become a nuisance outdoors on patios or indoors when they invade in significant numbers. On warm days during winter and early spring, boxelder bugs sometimes appear on light painted surfaces outdoors on the south and west sides of the house, resting in the sun.” Boxelder bugs that have not yet reached adulthood before overwintering will most likely die. The average lifespan of a boxelder bug is one year. Infestation levels can vary from year to year, sometimes in large numbers and sometimes trickling in.

How can I get rid of boxelder bugs? 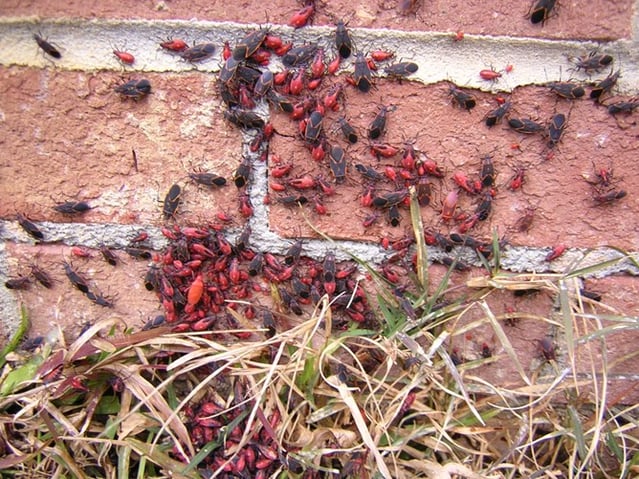 Pictured Above: Boxelder bugs trying to find an entry point on the exterior of a home  Photo Credit: pestworld.org

Crushing boxelder bugs releases a scent that can attract several types of beetles, including carpet beetles, not to mention a red stain left behind. If you find boxelder bugs in your home, simply vacuum or sweep them up, tie the bag closed, and dispose of it outdoors. When boxelder bugs have decided to take up residence in your walls or attic, there is no way to get rid of all of them no matter how much you vacuum.

Pest control professionals work to significantly reduce the number of boxelder bugs that enter your home without a 100% elimination guarantee. If a pest control company tells you that all of the boxelder bugs in your home will die or be prevented with their treatment, it’s just not true. There is no true way to predict whether a boxelder bug issue will arise until they’ve arrived. That’s why it’s important to take steps towards prevention before boxelder bug season begins in late October.

Stink bugs and ladybugs act similar to boxelder bugs when they overwinter in wall voids during the fall and winter, then leaving in the spring. Recurring boxelder bug infestations does not mean you will have stink bug or ladybug infestations, but it’s not to say that it won’t happen.

Cooper’s Boxelder Bug Prevention Program aims to significantly reduce the number of boxelder bugs that enter your home in the fall. Treatments take place from October 15-30th for the best possible results.

If you currently have a large amount of boxelder bugs at your home, we can still perform the Boxelder Bug Prevention Program. However, this reduction plan is not 100% guaranteed.

Please give us a call at 1-800-949-2667 or fill out the contact form on this page to find out more about our Boxelder Bug Prevention Program.