Daddy longlegs have long been both a fascination, insect oddity, and source of spooky myths. Have you ever heard that daddy longlegs are the most venomous spiders in the world, but that their mouths aren’t big enough to bite you? So have we! Read along to explore the world of daddy longlegs and myth bust their most common misconceptions. 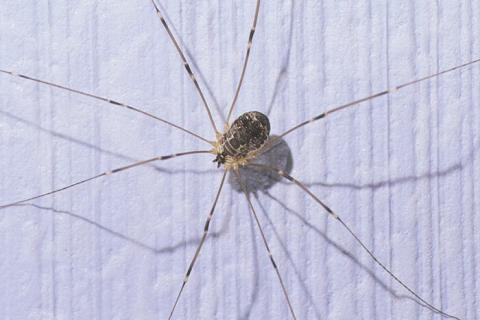 Daddy longleg is not an established name for any specific insect, but is a nickname originating in the United States due to their unique appearance. When someone says that they see a “daddy longleg,” they are unknowingly referring to Opilionids arachnids, which is not a spider at all, and more closely related to scorpions. They are also called “harvestmen” because some say that their legs resemble scythes used by farmers to harvest their crops.

Their distinguishing feature are their thin, long legs that elevate them far above the ground below. Daddy longlegs have 8 legs that spur off of their small, single segment body. 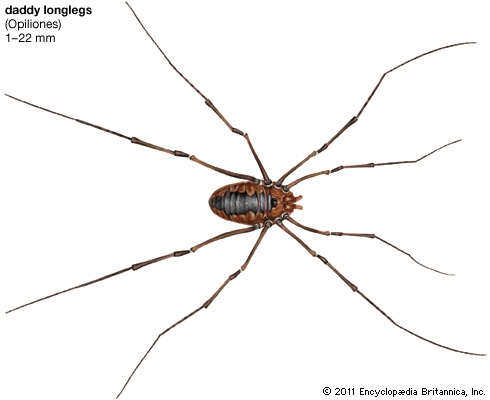 FALSE: They are the most poisonous spider in the world.

Opilionids do not possess venom glands, making them harmless to humans. Their defense mechanism is to curl up and play dead to fool predators. Also, they also have been known to secrete an unpleasant scent to ward off predators. Daddy longlegs are more scared of you than you are of them!

This is correct. They are equipped with grasping claws that are too small and weak to break skin. Daddy longlegs do not use their mouths to bite predators in defense and have not been known to bite or attack humans.

FALSE: They are spiders.

This confusion is due to biology and their appearance .They don’t produce silk to make a web and have only one set of eyes as opposed to true spiders that have 4 sets of eyes. Spiders have three body segments whereas daddy longlegs only have two.

Daddy longlegs does not do much moving in general. A lot of their days are spent coming out of their hiding place, staying put, and then going back. Their long legs are for combat with other male daddy longlegs who are competing for the same female.

Unlike starfish, daddy longlegs cannot grow back any of their 8 legs after losing them, either in combat or being pulled off by mischievous children. They will not die after losing a leg but rather become less efficient at moving around.

TRUE: They like to hang out in large clumps.

If you spend any amount of time on social media, you have probably seen the video where what looks like a clump of hair is actually a clump of daddy longlegs. Scientists do not know what causes this behavior, but it does happen quite often, especially outside of caves.

What do daddy longlegs eat?

No, daddy longlegs are not after your blood. Their feeding mechanism referred to as stomotheca can take in small chunks of food at a time, as opposed to spiders who are only able to take in liquids. Their diet mainly consists of food they can scavenge including small insects, plant matter, snails, and feces. Most do not hunt live prey, but instead passively stumble upon food sources along the ground. By maintaining a diverse selection of nutrition, they are able to survive climates of high heat, chilling winds, humid climates, and dry areas. They are known to adapt to their environment and possess slight differences according to the geographic location such as coloring, size, and diet. Daddy longlegs are eaten by birds, spiders, frogs and toads, making them an integral part of the ecological food chain.

Where do they come from? 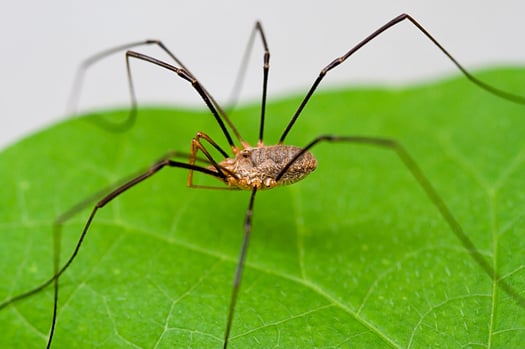 Daddy longlegs are found on every continent except for Antarctica. You can find them underneath rocks, in leaf piles, and between cracks and crevices of your home’s foundation. In other countries, daddy longlegs can be found on rock ledges and around caves. They aren’t natural hunters and prefer to hide from predators where their brown, black, and white bodies can successfully camouflage.

What can I do if I find them in my home?

Daddy longlegs are not inherently dangerous to humans and are more of a nuisance than a destructive pest. You are mostly likely to see them around your home or in your basement seeking shelter. As for most household pests, we recommend that you try to seal up any small entry points around your home such as small cracks and openings to keep them outside. Picking up any fallen branches and large stones around your property will also eliminate another common living space for daddy longlegs.

While Cooper does not provide specific treatment for daddy longlegs, spider control is included with our Home Traditional and Home Intensive services.