Spotted Lanternflies and Emerald Ash Borers: What can I do?

Emerald ash borers are both local and spread across the United States. They breed in large numbers and emerge when the weather becomes warm each spring. Offices on a state by state level are attempting to contain and eliminate emerald ash borer populations, to no significant success. As a result of emerald ash borer growth and feeding, ash trees are perishing at alarming rates. Often found in residential suburban areas, the impact of ash tree deaths can lead to additional issues. Infected trees become fragile and are more likely to fall, increasing the risk of damage to your home. Air conditioning costs can increase with a reduction of the large amount of shade that ash trees provide. Problems continue to cascade as ash trees head towards extinction.

Should I be concerned? 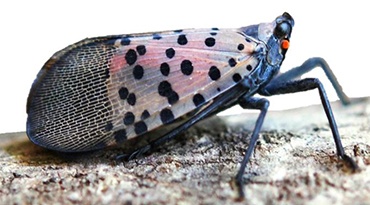 Spotted lanternflies are incredibly destructive and can cause damage quickly because of their habit to collect in large numbers. Not only are they a threat to trees, but they also feed upon popular crops such as grapes and peaches, making it challenging for farmers to grow. Pennsylvania is also known for their attractive state parks. There is an immediate threat to these parks because of potential geographic expansion of populations if a spotted lanternfly were to stow away with a park visitor.

Where did they come from?

The spotted lanternfly is native to China, India, Vietnam, and introduced to Korea where it has become a major pest. The first confirmed infestation within the United States was in Berks County, Pennsylvania in September of 2014. It is likely that they were introduced by stowing away in shipping crates as eggs, which are laid 30-50 at a time. The spotted lanternfly has now grown to be an epidemic across Pennsylvania, threatening the lives of foliage, crops, and trees.

What is a spotted lanternfly? 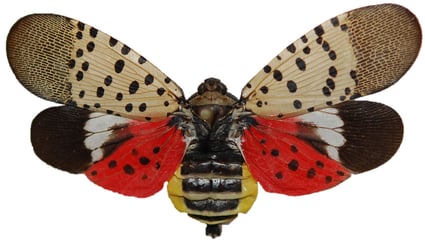 Spotted lanternflies are what is called “plant hoppers,” an insect that jumps from plant to plant to feed. The Pennsylvania Department of Agriculture provides clear identification: “The Spotted Lanternfly adult is approximately 1” long and 1/2” wide at rest. The forewing is grey with black spots and the wings tips are reticulated black blocks outlined in grey. The hind wings have contrasting patches of red and black with a white band. The legs and head are black; the abdomen is yellow with broad black bands. Immature stages are black with white spots, and develop red patches as they grow.”

In early May, dormant spotted lanternfly young hatch. They remain active, feeding on tree sap in large numbers. Ailanthus altissima, often referred to as tree of heaven, is another invasive species to Pennsylvania from China and a preferred food source for the spotted lanternfly. 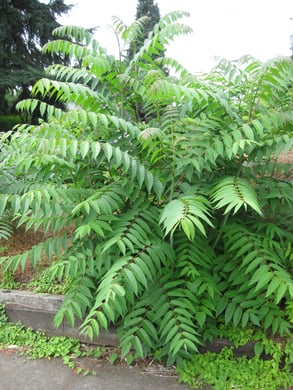 They also feed on 25 other species of trees native to Pennsylvania, making them a serious threat. As they eat through trees, spotted lanternflies secrete a sticky substance of partially digested tree sap called “honey dew” which collects on the ground around the infected tree. This becomes visible when black fungus, called sooty mold, grows on the honey dew. Stinging insects are also attracted to the honey dew, making their presence known at infected trees.

What should I do if I see a spotted lanternfly?

Finding spotted lanternfly egg masses before they hatch is your best defense against infestations. If you spot egg masses, Penn State Extension recommends that you scrape them into a ziplock bag with the edge of a credit card and then pour rubbing alcohol in to effectively kill the unborn larvae. Watch the video below for step by step instructions.

If you see a live spotted lanternfly, capture it and pour in rubbing alcohol to kill it as you would do the egg masses. The next step is to call 1-866-253-7189 or email badbug@pa.gov to alert the proper authorities of its presence.

Should I be concerned?

Ash tree populations across the country are rapidly declining as there is no known way to completely eradicate the growing emerald ash borer populations. We are not able to grow new ash trees at the rate that they are being destroyed, potentially resulting in total ash tree elimination. Ash trees are common to residential neighborhoods in suburban areas, providing an immediately negative risk to your home. When infected trees decay and die, they become frail and pose a significant fall risk which can severely damage your home or cause personal injury. Air conditioning costs rise as large ash trees that once provided shade become obsolete, not to mention the general aesthetics of decaying trees devaluing your home.

To learn more about the emerald ash borer and its impact on our environment, watch the video below.

Where did they come from?

What is an emerald ash borer?

The New Jersey Department of Agriculture identifies the emerald ash borer: “The adult is approximately 1/2” long and 1/8” wide, metallic green in color, with a metallic copper red abdomen. The larvae are white or cream colored, measure approximately 1 to 1 ¼” long and have 10 abdominal segments that are bell shaped.” They are no bigger than a penny, often making them difficult to spot.

Emerald ash borers have destroyed tens of millions of ash trees making them the leading destroyer of ash trees in the United States. They become present from May to early June and breed through the summer, going back into hibernation or else dying off by the beginning of September. Adults feed on ash tree bark and leaves for several days before finding a mate and laying eggs within the trees. Females can mate several times, potentially laying hundreds of eggs in one season. The bulk of the damage to ash trees happens when the eggs hatch and the larvae grow. As they develop throughout the winter, they eat through the tree trunk, leaving behind curved tunnels with tightly packed frass. The ash tree is unable to recover from the external and internal damage, resulting in premature death.

According to the Emerald Ash Borer Information Network, “ash tree leaves are compound and composed of 5-11 leaflets. Leaflet margins may be smooth or toothed. Branches and buds are directly across from each other and not staggered. When looking for opposite branching in trees, please consider that buds or limbs may die; hence not every single branch will have an opposite mate.”

Ash trees are commonly found in parks or residential properties throughout neighborhoods. If you suspect that you have found an infected ash tree, consider the identification points below. 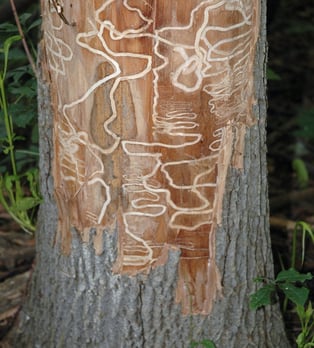 What should I do if I see an emerald ash borer?