Are Spiders In My Home Dangerous?

No matter how clean your house may be, that won’t stop insects from finding their way into your home, particularly spiders. Even though spiders usually wonder in by accident, it usually only happens when they are searching for food. If you’re like many homeowners, you may be wondering if the common house spiders are dangerous at all to you or your family.

No matter how clean your house may be, that won’t stop insects from finding their way into your home, particularly spiders. Even though spiders usually wonder in by accident, it usually only happens when they are searching for food. If you’re like many homeowners, you may be wondering if the common house spiders are dangerous at all to you or your family.

How do Spiders Get into My House?

Spiders will enter homes through the many gaps that currently exist on your property. If you happen to live in a wooded area or have a garden near the base of your foundation, you can be more prone to having spider activity in your home since spiders are more prevalent in those types of environments. Spiders are attracted to areas that are damp or dark, such as basements or gutters, but you can still find them in dry, warm areas of your home.

More common ways spiders enter homes by entering through poorly screened windows and doors or cracks and gaps around door or window frames and poorly sealed utility entry points. Another common way spiders enter a home is by hitchhiking on boxes, outdoor items as well as other numerous items that are brought inside of a home from the outdoors.

What are Common Spiders Found in Homes?

There are several different species of spiders that can be found in many New Jersey and Pennsylvania homes. However, most are harmless and are only seen as a nuisance rather than a threat.

The only type of spider in this part of the country that can pose harm to you and your family if it makes its way into your home is the Black Widow.

What is a Cellar Spider?

Cellar Spiders are pale yellow to light brown, have long spindly legs, small bodies and are commonly found in dark, damp places such as cellars, basements or crawlspaces. They can also be found in the corners of garages, sheds, barns and warehouses, on eaves, windows, ceilings, inside closets, and in sink cabinets, etc.

What is an American House Spider?

More likely than not, the spiders commonly found in your home are a variation of the American house spider species. These spiders are very common throughout New Jersey and Pennsylvania, as well as worldwide.

Habitats that are constructed inside structures include locations such as, upper corners, under furniture, inside closets, basements, crawlspaces, and garages. When outside, American house spiders can create webs around windows, under eaves, particularly near light sources so they can attack their prey.

The appearance of the American house spider can vary depending on the species, but they are generally a yellowish brown color with an elongated abdomen.

Just like the Cellar spiders, American house spiders are not a medically important pest but instead are considered a nuisance to homeowners.

What is a Jumping Spider? 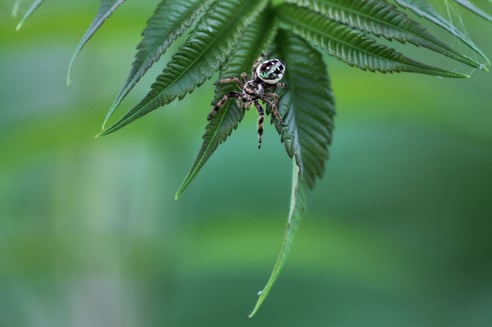 Opposite to Cellar spiders, Jumping spiders are more compact in size with short legs. They are usually black with pale markings and can found all across the United States.

Even though most spiders are active at night, you’ll find the Jumping spider lively during the daylight hours enjoying the sunshine.

When they make their way indoors, you’ll notice their webs near windows and doors since their prey are attracted to those areas, and Jumping spiders have better vision in sunlit areas. According to the National Pest Management Association (NPMA), Jumping spiders “have the keenest vision of all spiders and can detect movement up to 18" in the distance.”

Outdoors Jumping spiders can be seen scurrying across tree bark, on bushes, under rocks and boards, on fences and the outside of buildings.

Although Jumping spiders have the ability to bite in defense, the bite is not considered harmful.

What is a Wolf Spider? 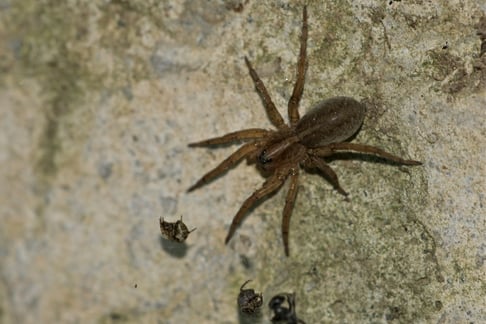 With over 100 different species of Wolf spiders all across the United States, you may have already had an encounter with one of these spiders, especially in your garden.

Wolf spiders have long, spiny legs and are dark brown with pale markings or stripes on their hairy body. These spiders, regardless of nesting indoors or outdoors, are typically ground-dwelling spiders. Inside you can find Wolf spiders along the walls or under furniture on the ground-level. Outside you can find these spiders under stones, landscape timbers, firewood, leaves and other debris. During the day Wolf spider will hide in their shelter.

Wolf spiders don’t use their webs to hunt for prey. Instead, they chase their prey because they are fast spiders. If provoked, Wolf spiders can bite, but it is rare that they do.

What is a Black Widow Spider? 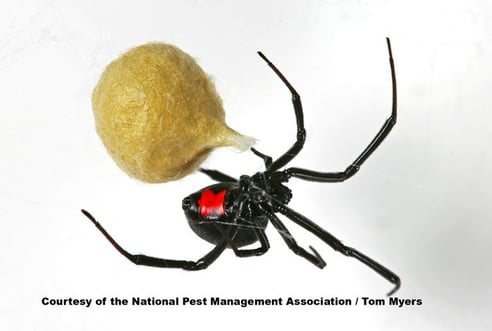 Black Widow spiders are one species of spiders that you don’t want to have the pleasure of meeting. Female Black Widows are large; shiny black spiders have a bright red hourglass marking on their back or underside of their abdomen and have a dangerous venom that can harm the central nervous system. Males are much smaller and are brown in color.

Habitats for Black Widow spiders include around woodpiles, under eaves, in boxes, and other areas where they are undisturbed. They tend to make their ways indoors by being brought in on woodpiles. Black Widow webs are typically constructed on ground-level in undisturbed areas.

If you happen to find a Black Widow in your home, it’s recommended to call a pest control professional to have it removed safely. Female Black Widow spiders are aggressive and will bite in defense, especially if she is defending her eggs. Black Widow bites can cause fever, increased blood pressure, sweating, and nausea. As long as proper medical treatment is sought promptly, fatalities from a Black Widow bite is unlikely.

Black Widow bites can be particularly dangerous for young children and include symptoms such as swelling and reddening at the bite site, muscle tightening and breathing problems from paralysis of the chest muscles. If you suspect your child has been bitten by a Black Widow, immediately take the child to your local emergency department.

Can I Prevent Spiders from Entering My Home?

If you’re concerned about keeping the spiders out of your home, you can prevent them from entering in the first place with Cooper Pest Solutions.

Since spiders are very common, the best way to reduce their presence in your home is to remove their food source. An area that is not hospitable to insects will not be nearly so attractive to spiders, which is why Cooper Pest Solutions recommends their Home Traditional and Home Intensive services.

Cooper’s Home Traditional and Home Intensive services are quarterly maintenance programs that treat for a variety of common household pests, including spiders.

The Home Traditional Service Plan provides preventive pest and rodent control for your home, year round. As part of your plan, you will receive four services per year. Each year you will receive three exterior maintenance services and one interior service performed during the winter months.

The Home Intensive Service Plan includes four preventive services per year, just like the Home Traditional Service Plan. Each service is unique and will be accompanied by a detailed 30-point inspection report with detailed findings as well as providing you with important recommendations for your home.

The Home Intensive Service Plan includes a much more detailed coverage of pests and home structures than the Home Traditional. In regards to spiders, if you have the Home Intensive Service Plan, a Cooper Pest Solution technician will take care of any necessary pruning or sealing of cracks around the foundation of your home to keep the spiders out.

If you are only concerned about eliminating spiders rather than other common pests and rodents, you can opt for a one-time service with a 90-day warranty of service through Cooper Pest Solutions.

If you’re ready to keep the spiders out of your home, give Cooper Pest Solutions a call at 1-800-949-2667 or fill out our free estimate form.