How to Get Rid of Spiders

Spiders are unfortunate cohabitants for homeowners. They are commonly found in garages and basements, seeking shelter from the outdoors. Although most spiders in our area are not dangerous, they are still a nuisance to homeowners year-round. If you have spiders in your home or you want to learn more about spiders in New Jersey and Pennsylvania, our library of spider information will answer your questions.

How much does spider removal cost?

What are wolf spiders?

What kinds of bugs live in my basement?

Are spiders in my home dangerous?

How To Pest-Proof Your Home This Winter

How much does spider removal cost?

If you are ready to purchase pest control for spiders in your home, you should be prepared to select the type of company and their program features to meet your exact needs. Any pest control company should be able to answer the following questions, which will guide you to make an informed decision.

If a company cannot answer even one of these questions, you should rethink about how reputable they are. We suggest also checking the company’s website and reading their online reviews as well.

There is no set price across the pest control industry for spider control, but you could expect to pay between $150 and $300 dollars to solve an immediate spider problem in your home. Depending on the severity of the problem, additional services may also be needed or you may also need a recurring maintenance plan.

What are wolf spiders?

Wolf spiders are large spiders that can be found in and around homes in the New Jersey and Pennsylvania area. They are often mistaken for tarantulas because of their alarming appearance, speed, and size. If you have Wolf spiders living on your property, they could wander into your home in search of small insects to eat. Female wolf spiders are 3/8 – 1 3/8“ and males are 1/4 – 3/4“ and they can be a combination of varying shades of brown and black to help them camouflage. Wolf spiders, called lycosids, have 8 legs and 8 eyes separated into two rows. Their multitude of eyes provides them with keen night vision for nocturnal activity.

What kinds of bugs live in my basement?

Your basement can become a spooky place when it’s full of insects that you do not wish to encounter. The mystery of basement bugs in your home can go unsolved due to the strong aversion and fear some people have to pests they can’t identify. If you are too frightened to visit your basement, it will remain untreated and can play host to additional pest infestations. Cooper can help manage the levels of pest activity in your home and basement so you can enjoy every room of your house in peace. Along with crickets, silverfish, centipedes, and millipedes, spiders are common basement dwellers. 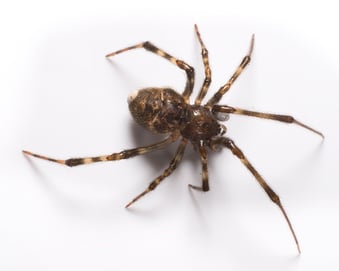 Spiders are usually the first thing that comes to mind when you think about bugs in your basement. There are several types of spiders that are commonly found in New Jersey and Pennsylvania, which include the wolf spider, brown recluse spider, and cellar spider. Spiders are drawn to basements due to the dark, damp conditions that exist. In general, spiders have 8 legs (four pairs). They have two body regions: a cephalothorax (fused head and thorax) and an abdomen, which are joined together by a narrow waist. Most spiders have six or eight simple eyes in various arrangements. Spiders spin their webs by producing silk secreted as a liquid that hardens on contact. They are actually beneficial because they eat almost every other tiny bug in your basement. If you are creeped out and cannot stand their presence, Cooper can eliminate and control spider populations within your basement and home.

Are spiders in my home dangerous?

There are several different species of spiders that can be found in many New Jersey and Pennsylvania homes. However, most are harmless and are only seen as a nuisance rather than a threat.

The only type of spider in this part of the country that can pose harm to you and your family if it makes its way into your home is the Black Widow.

Cellar Spiders are pale yellow to light brown, have long spindly legs, small bodies and are commonly found in dark, damp places such as cellars, basements or crawlspaces. They can also be found in the corners of garages, sheds, barns and warehouses, on eaves, windows, ceilings, inside closets, and in sink cabinets, etc. 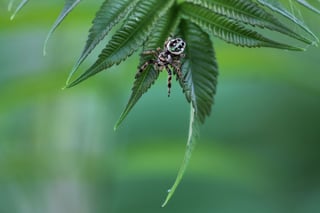 Opposite to Cellar spiders, Jumping spiders are more compact in size with short legs. They are usually black with pale markings and can found all across the United States. Outdoors Jumping spiders can be seen scurrying across tree bark, on bushes, under rocks and boards, on fences and the outside of buildings. Although Jumping spiders have the ability to bite in defense, the bite is not considered harmful.

Wolf spiders have long, spiny legs and are dark brown with pale markings or stripes on their hairy body. These spiders, regardless of nesting indoors or outdoors, are typically ground-dwelling spiders. Inside you can find Wolf spiders along the walls or under furniture on the ground-level. Outside you can find these spiders under stones, landscape timbers, firewood, leaves and other debris. During the day Wolf spider will hide in their shelter. Wolf spiders don’t use their webs to hunt for prey. Instead, they chase their prey because they are fast spiders. If provoked, Wolf spiders can bite, but it is rare that they do. 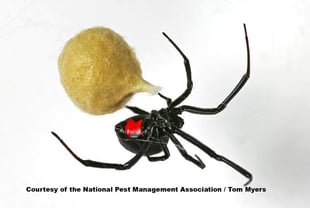 Black Widow spiders are one species of spiders that you don’t want to have the pleasure of meeting. Female Black Widows are large; shiny black spiders have a bright red hourglass marking on their back or underside of their abdomen and have a dangerous venom that can harm the central nervous system. Males are much smaller and are brown in color. Habitats for Black Widow spiders include around woodpiles, under eaves, in boxes, and other areas where they are undisturbed. They tend to make their ways indoors by being brought in on woodpiles. Black Widow webs are typically constructed on ground-level in undisturbed areas. If you happen to find a Black Widow in your home, it’s recommended to call a pest control professional to have it removed safely.

Daddy longleg is not an established name for any specific insect, but is a nickname originating in the United States due to their unique appearance. When someone says that they see a “daddy longleg,” they are unknowingly referring to Opilionids arachnids, which is not a spider at all, and more closely related to scorpions. They are also called “harvestmen” because some say that their legs resemble scythes used by farmers to harvest their crops.

No, daddy longlegs are not after your blood. Their feeding mechanism referred to as stomotheca can take in small chunks of food at a time, as opposed to spiders who are only able to take in liquids. Their diet mainly consists of food they can scavenge including small insects, plant matter, snails, and feces. Most do not hunt live prey, but instead passively stumble upon food sources along the ground. By maintaining a diverse selection of nutrition, they are able to survive climates of high heat, chilling winds, humid climates, and dry areas. They are known to adapt to their environment and possess slight differences according to the geographic location such as coloring, size, and diet. Daddy longlegs are eaten by birds, spiders, frogs and toads, making them an integral part of the ecological food chain. Daddy longlegs are not inherently dangerous to humans and are more of a nuisance than a destructive pest. You are mostly likely to see them around your home or in your basement seeking shelter.

How to Pest-Proof Your Home This Winter

Planning ahead for winter pest prevention is one of the smartest things you can do as a homeowner. Pests like spiders, mice, and stink bugs are especially prevalent in homes throughout New Jersey and Eastern Pennsylvania every winter. Use the following tips to prevent winter pests from infesting your home.

Want a Free Estimate?
Need to Schedule Service?
Have a Question?

WHY CHOOSE COOPER FOR SPIDER CONTROL?