What is a vole?

Voles are small rodents, also referred to as "meadow mice" because of how closely they resemble mice upon first glance. Although they are considered to be rodents, voles are not mice. They are stocky creatures measuring about 5-8 inches long, including its tail, with course blackish or grayish brown fur. Voles are most known for their burrowing on golf courses, yards, and parks. They like to burrow in large open areas that have ample amounts of vegetation for them to feed on. Most of their time is spent below ground, so the easiest way to spot a vole infestation is by finding their burrows.

What is the difference between moles and voles? 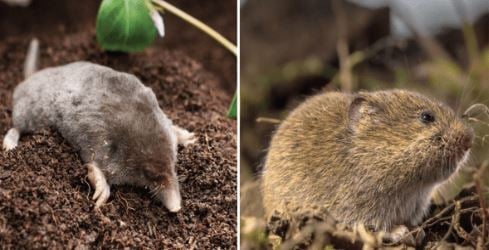 You can differentiate moles from voles with the following simple facts.

They really are quite different! If you are concerned with vole or mole burrowing in your yard, call you local wildlife or pest control company for professional help.

Why do I have them?

Voles are widespread rodents, living across most of North America, decreasing in population south of Georgia and New Mexico. In the spring, voles create "runways" above ground that they use to navigate in a crisscross pattern. Under ground, voles create several shallow burrows that you can find by following runways. In the winter, they will burrow through the snow to stay warm and remain insulated in between daily foraging.

If you have a healthy lawn, a vegetable garden or ornamental trees and shrubs, you could attract voles. Because they mainly eat vegetation and plant roots, thriving plant-life is a perfect place for voles to live. Voles need to eat their body weight in food every day to survive their short lifespan which averages one year. Without an environment that is rich in easily accessible nutrients, voles cannot survive. Voles do not hibernate or hoard food so they are forced to scavenge for food every day. 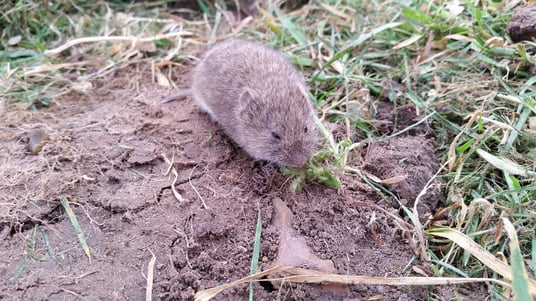 According to the The Old Farmer's Almanac, you can identify vole damage by looking for the following signs.

Voles have many natural predators including owls, raccoons, hawks, and foxes. Their size is a disadvantage when it comes to defending themselves. Although vole spend the majority of their lives underground, they do spend time above ground, even long enough for you to see one in your yard.

Voles are active and breed year-round, this means that a small vole problem can quickly become a very large vole problem. They can carry several diseases such as Hantavirus, which humans can contract by coming into contact with feces, urine, or saliva from infected voles. For that reason, it's highly suggested that you do not handle voles directly.

How do I get rid of voles?

If you want to get rid of voles on your own, you need to create an environment that is not conducive to their survival. Use fencing specifically made to be vole-proof, placing it at least one foot into the ground around trees and vegetable gardens. Remove debris like fallen leaves from your yard on a regular basis. Voles prefer areas protected by ground cover to feed, out of sight of predators. If you're looking for a longer term solution, contact your local wildlife or pest control company.

Can Cooper get rid of the voles on my property?