Learn About Japanese Beetle Behavior and Biology in NJ and PA

What is a Japanese Beetle?

Japanese beetles are colorful, almost metallic beetles that are common in New Jersey and Pennsylvania. The first Japanese beetles to be spotted in the United States was in 1916 in Riverton, New Jersey. These pests were introduced from Japan and quickly became a destructive and invasive pest. Adult Japanese beetles are about ½ inch in length and appear copper and green in color with fuzzy white spots. They are active mid-summer and swarm in large groups of hundreds to thousands at once. Japanese beetles reproduce quickly and are clumsy flyers. Although they're not diving in for an attack, they have no problem bumping into you multiple times as they fly around. Japanese beetles that come into your property can be found on bushes and shrubs where they feed on leaves. The pests eat through leaves, destroying all of the leafy green pieces and exposing the veins in between. The leaves will appear almost skeletal, or as if the leaves were scorched and burned, being the most unique sign of their activity.

Why do I have Japanese Beetles? 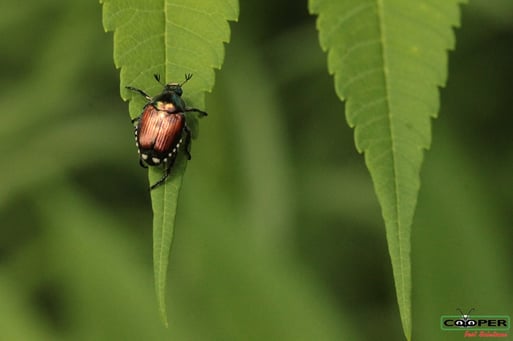 Japanese beetles begin as grubs in the ground and emerge in the thousands between the end of June to July. Individual adult Japanese beetles live only 30-45 days on average, but their young, referred to as “grub,” will live in the soil for several months before surfacing. Their primary food source consists of leaves, particularly on dry or older plants. There is little you can do to prevent potential Japanese beetle infestations due to their ability to hide underground and emerge quickly in large communal groups.

At this time it is not believed that Japanese beetles attack or bite humans. Although they might be clumsy and bump into you, they will do no physical harm. Their true danger lies in their ability to quickly decimate vegetation as they eat in large quantities.

Will they ruin my garden? 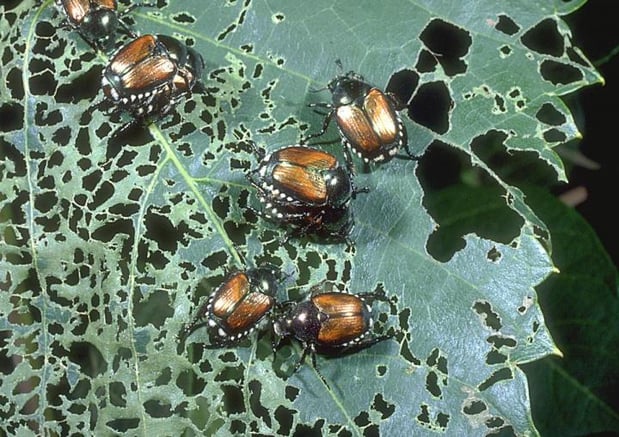 Japanese beetle eggs hatch into "grubs," which feed on plant roots while developing deep in the soil for several months before emerging as mature, full size Japanese beetles. The adults feed on leaves, flowers, and decaying fruit, all of which are common to homeowners’ gardens. Once they find plants like like, they chew through leaves and flowers leaving the veins exposed. The tell-tale signs of Japanese beetle activity is the damage they cause to leaves. They leaves look almost skeletal, as if they were completely scorched in a fire. Japanese beetles come out in large groups and feed together and are not picky when it comes to the type of foliage they attack.

In addition to your garden, Japanese beetles also go after grass, eating the roots and causing large brown spots across your lawn. If it escalates, this will become more than just a cosmetic problem. Exposed, dry soil and dead plants can attract other pests.

Why are Japanese beetles in my pool?

This is a commonly asked question when Japanese beetles pop up seemingly out of nowhere in the summer. You open up your pool filter, only to find large amounts of dead Japanese beetles which won't reduce no matter how many times you clean it out. It's as simple the beetles as falling into the pool and not being strong enough to fly out. The phenomenon plagues pool owners every year with seemingly no way to get rid of them. Like other beetles and flying insects that end up in your pool, the only way you can prevent Japanese beetles from dying in your pool is to prevent them from feeding on the foliage on your property.

How can I get rid of them?

There are several products that you can buy at big box retailers for the control of Japanese beetles. Tools like Bag A Bug can be very useful for DIY solutions at your home. Keeping your plants well-watered and healthy may deter Japanese beetle activity as they prefer dry vegetation to feed on. Another unfortunate, but effective way to get rid of Japanese beetles is to physically pick them off of plants and dropping them into a solution to drown them. Speak to your landscaper before engaging in any Japanese beetle pest control on your own.

Cooper Pest Solutions does not currently offer a program designed to control Japanese beetle populations. However, our entomology experts may be able to put together a custom pest control plan for you upon request. Please call our customer service department at 1-800-949-2667 for more information.