Get Rid of Fungus Gnats in NJ and PA

What are fungus gnats?

Fungus gnats are small flying pests that breed in the soil of potted houseplants and greenhouses. They are about 1/8" long and grayish black with long legs. A lot of homeowners and those who work in offices encounter fungus gnats. These pests prefer to live in moist soil found where a potted houseplant has been over-watered. Moist, organic matter attracts fungus gnats. Although they're relatively harmless, it's still unsightly to the aesthetic of your plant-life.

What is the difference between fungus gnats and fruit flies?

Fungus gnats are small flying pests commonly found indoors, hovering around houseplants. They lay eggs in moist organic debris or potting soil, feeding on the roots of plants. If you find fungus gnats in your home, don’t stress yourself out. Fungus gnats do not cause structural damage, eat plant leaves, or bite. Even though they are relatively harmless, fungus gnats are considered a nuisance by most homeowners that do not want to have to deal with their presence indoors. They live within the top 2-3 inches of soil within a potted houseplant and will remain relatively close to the plan during their lifespan. Although potted plants are the most common source of fungus gnats, other possible breeding sources include moisture conditions created by roof, window and plumbing leaks.

Pictured Above: fungus gnats on a potted succulent    Photo Credit: World of Succulents

Fruit flies are another flying pest that can live indoors among humans. Just like fungus gnats, fruit flies can breed where moisture and organic matter are both present. Some of the more common breeding sources include fruit and produce that is damaged, rotten or over ripened, recycling bins, trash cans with spillage and garbage disposals. 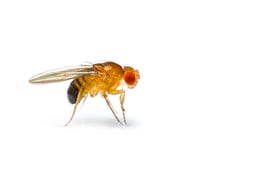 They can also be found hovering over soaked soil within potted houseplants, which is the main breeding ground for fungus gnats. Although they're about the same size as fungus gnats, fruit flies have bright red eyes and a tan body. Fruit flies are also harmless to humans, but should be eliminated if found. By getting rid of the breeding source, fruit flies will most likely leave, seeking out a more suitable breeding source. The adults typically do not live much more than a couple of weeks during which time their sole purpose is to reproduce more flies.

No, fungus gnats do not bite and are not a health threat to humans. They do not transmit diseases or sting humans. The only "danger" they pose is more of a cosmetic one as they can damage roots and stunt plant growth.

How do I get rid of fungus gnats?

The best way to get rid of gnats is to get rid of their breeding source. Depending on the variables in your home, there can be a variety of reasons why gnats are in your home. If you have fungus gnats hovering above your plants, the easiest solution is to get rid of the plant and do not over-water potted indoor plants in the future. As a general rule, repair any roof leaks, plumbing leaks or window leaks and dry out any areas that became damp or wet as a result of the leak.

How can I prevent fungus gnats in the future?

Preventing fungus gnats is a simple as avoiding decaying plant matter. Do not over-water house plants. By creating an environment that's ideal for breeding, you are opening up the possibility for fungus gnat activity. If you are having trouble locating the breeding source, call Cooper for an inspection.

How can Cooper Pest Solutions help?

Fungus gnat infestations require an inspection by one of our gnat and fly specialists. This inspection aims at finding the breeding source of the infestation. Once our specialist locates the breeding source, they provide recommendations for how to fix or remove it. Fly and gnat inspections are charged hourly at a rate of $125 per hour with a minimum of one hour. Please call our office at 1-800-949-2667 or fill out the contact form on this page to schedule an inspection of your home.