How to Get Rid of Stink Bugs

Stink bugs are one of the most common pests that reappear in the fall, seeking out warmth and protection for the winter. These small pests are shield-shaped and brown, with two antennae and a set of wings. Although they are primarily agricultural pests, homeowners in New Jersey and Pennsylvania are plagued with stink bugs each autumn. Do you have stink bugs in your home? Or maybe you want to learn more about how stink bug pest control works. Our library of stink bug information will answer your questions.

Spring is here and so are stink bugs!

Why are there bugs in my bathroom?

How to Keep Stink Bugs Out of Your Home

What do insects do in the winter?

How To Pest-Proof Your Home This Winter

Stink bugs do not bite. They do not have fangs or a stinger but instead have a sucking mouth part. They are attracted to plant matter and fruits, including the fruit from trees that drop long bean pods, rather than seeking human flesh. Stink bugs do not pose any significant health risk to humans because they avoid areas of high traffic, taking shelter in wall voids away from predators. The only negative impact they have on humans is their presence being a nuisance. If they are crushed, they have a foul odor which is unpleasant. Stink bugs make their way walls in great numbers, sometimes reaching thousands, which can also add common aversions. 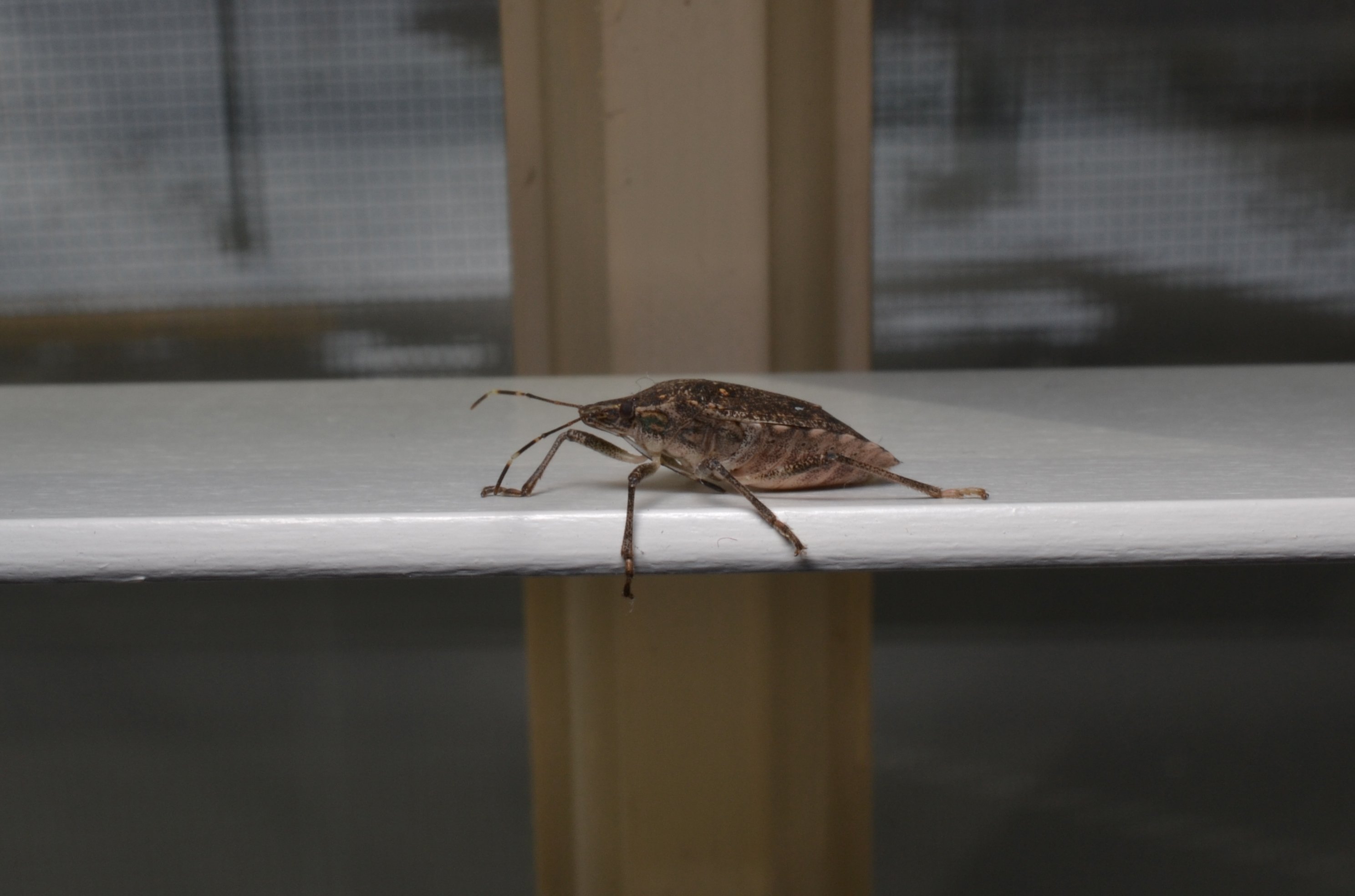 Stink bugs, also called “brown shield bugs,” are small, brown insects that invade homes in the late summer and early fall. They are about ½ inch in length and come in various shades of brown, with 6 legs and a set of antennae. The first recorded finding of a stink bug in the United States was in 1999 in Allentown, PA., which is only about 70 miles west of the Cooper Pest Solutions headquarters in Lawrenceville, NJ. Stink bugs are not native to the United States. Although the true source of their introduction is unknown, it is most widely believed they stowed away on crates shipped over from Asia.

Spring is here and so are stink bugs!

How do you know if you have stink bugs overwintering in your home? It will be evident as soon as the weather warms up and you start to notice stink bugs inside of your home trying to make their way back outside. Stink bugs make their ways indoors beginning in the late summer to overwinter in homes. Once they enter a structure, they will stay active all winter long. As the weather warms up and spring arrives, stink bugs will emerge throughout your home as they try to make their way outdoors once again. Although they pose no harm to humans, they can be troublesome for homeowners if they invade a home in large numbers, which can be frustrating when they become active.

Typically stink bugs enter homes through various crack and crevices but once they enter the wall voids of the home to overwinter, they can be difficult to control. Stink bugs can be prevented by treating the home before the enter, however, once they have invaded your home or office there isn't much that can be done to get rid of them aside from removing or killing them as you see them and waiting for them to leave on their own.

Why are there bugs in my bathroom?

The brown marmorated stink bug is the most abundant in our area and is what you will see in your bathroom. 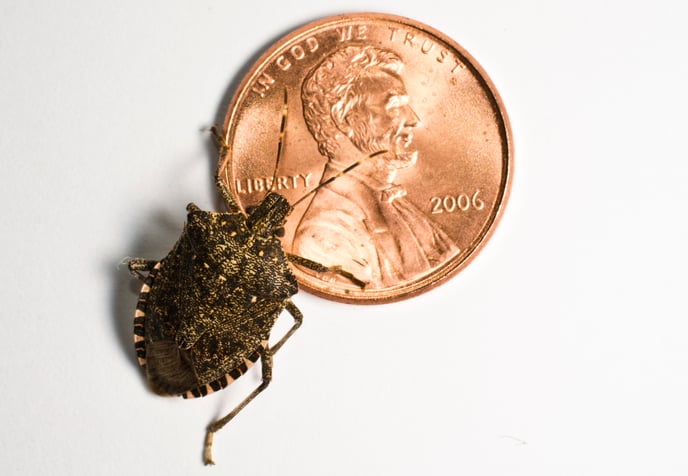 As you can see above, they are about the size of a penny so they don’t need a giant hole to enter homes. They are not destructive so they aren’t an immediate threat to your home. However, many clients call in about stink bug treatments because they simply don’t like seeing pests in their home.

Stink bugs are another common invader within residential homes in New Jersey and Eastern Pennsylvania. Similar to the behavior of ladybugs and boxelder bugs, they make their way into humanmade structures by hibernating or what is called “overwintering,” within wall voids seeking out warmth in the fall. They find entry points between cracks and crevices around the exterior of your home that may not be visible at first glance.

How to Keep Stink Bugs Out Of Your Home

Stink bugs are one of the most difficult pests to eliminate. Don’t panic! There are some precautionary measures you can take to prevent stink bug infestations on your own. While these tips will not prevent stink bugs with 100% success, but they will offer some relief if taken care of before stink bug season begins. 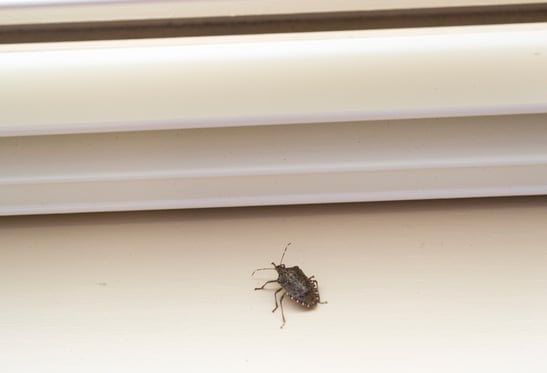 Because stink bugs live indoors to escape the cold, they will leave your home to breed and seek a food source once the weather warms up. Stink bugs will not reproduce or eat during the overwintering phase.

What do insects do in the winter?

To escape the winter, certain types of bugs seek the comfort of your home in insulated areas.  Overwintering bugs will traditionally seek south-facing walls since they offer the greatest warmth due to sun radiation during the winter and will seek to “shut down” in order to survive the coldest months. The bugs will also not eat, grow, or reproduce, which is why they are generally not considered an infestation.  Although the living space inside your home is nice and cozy, entering your house is actually an accident for these bugs since they typically enter your home through imperfections in your home’s exterior.  Once they are overwintering, often times they can wake up prematurely when it is too cold to go back outside which is when you typically see the bugs as they are exploring your home. 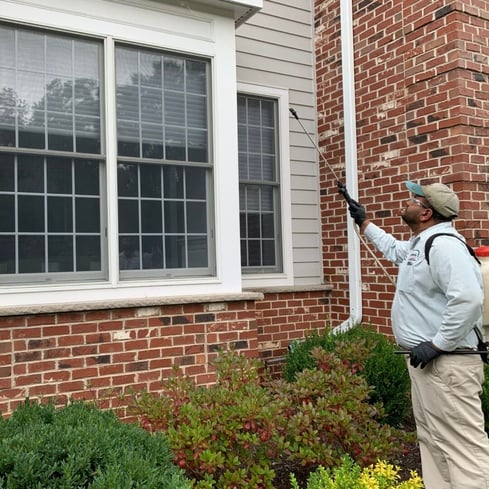 Preventative stink bug services take place from August 15th-September 30th to yield the best possible results. We have found that this time window provides the maximum amount of effectiveness against stink bug activity. We can still effectively treat for stink bugs after September 30th, but the service is not guaranteed to prevent stink bugs.

This service visits focus on chemical applications to the exterior of the structure and prevents the stink bugs from taking up residence in your home for the winter. Once stink bugs enter your home, it's close to impossible to get the infestation under control. This is why we provide preventative stink bug services instead of waiting for it to become a problem. Schedule service online or call our professionals at 1-800-949-2667 today for a free, no-obligation stink bug inspection.

How to Pest-Proof Your Home This Winter

Planning ahead for winter pest prevention is one of the smartest things you can do as a homeowner. Pests like spiders, mice, and stink bugs are especially prevalent in homes throughout New Jersey and Eastern Pennsylvania every winter. Use the following tips to prevent winter pests from infesting your home.

Want a Free Estimate?
Need to Schedule Service?
Have a Question?

You can schedule Stink Bug Prevention online for fast and simple checkout! Click here to get started.